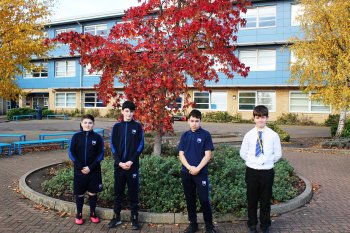 We are delighted to be able to commend five of our pupils in Year 8 and Year 9 for their quick thinking in coming to a member of the public’s aid early in November, when a woman in a wheelchair had a possible seizure and fell to the ground.

Our pupils were nearby and immediately rushed over to help, before phoning for an ambulance and waiting with the patient. A trained nurse living nearby also came to help in the meantime, with the information provided by our pupils assisting her in taking further action to help the woman. With adults on scene, the group then split up, with some remaining with the patient whilst others waited at the end of the road to direct the ambulance crew. Fortunately the lady had been revived by the time the ambulance had arrived, and it appeared that she was well known to the ambulance service.

One eyewitness stated that “the pupils managed the incident with great maturity. It is so reassuring to know that the next generation are so caring and capable, especially when there are often negative stories reported in the press. It gives me great pleasure to be able to write to Heathcote in praise of your pupils’ actions, and I feel that they deserved recognition for their great citizenship.”

Congratulations to Gabriel, Lemi, Ismail, Ben and Taya Mae, an inspiration to all – especially in the current climate. Heathcote is proud of you.