Heathcote enjoyed its bi-annual Art Exhibition last week, when a selection of pupils across a variety of year groups had the chance to exhibit their works in the school's lofty atrium. Head of Art Ms Armitt gives us a rundown;

This year the Heathcote Summer Art Exhibition featured work from Year 8, and KS4 and KS5 pupils. The Year 11 pupils impressed visitors with work from their “Fragments” exam unit. Junae Holder and Jesse Nnanna both interpreted the theme by creating artwork from fragments of broken glass in order to symbolise mental health issues. Junae’s glass sculpture of three female torsos represents the pressure that girls and young women experience from social media to look a certain way. Jesse combined broken glass with his ink portrait to symbolise the psychological fragmentation caused by mental illness.  Maya McDonald and Danika Lewis were inspired by fashion for their “Fragments” pieces. Danika’s stunning dress is made entirely from old fashion magazines, whilst Maya’s flamboyant suit jackets represent the stark contrast between social expectations of children and adults.

Year 12 and 13 students explored the theme “Freedom and Limitations”. Bethany Grover, who hopes to study Product Design at university, toured North Middlesex Hospital, taking photographs of medical equipment that has enhanced the quality of people’s lives, thus giving them more “freedom” to live fulfilling lives. She then re-created the images using Adobe Illustrator.

Tulin Uzguner explored the “Freedom” to make Art out of food. Her cupcake drawing was created using chocolate spread, and her loaf of Hovis bread was made entirely of toast. Emily Cook on the other hand, who will be studying Sociology and Psychology at Birmingham University, visited a homeless charity in Walthamstow and interviewed homeless people in order to understand the reasons why they became homeless. She then created a story board using a paper cutting on corrugated card technique, in order to represent the “limitations” that homeless people face. 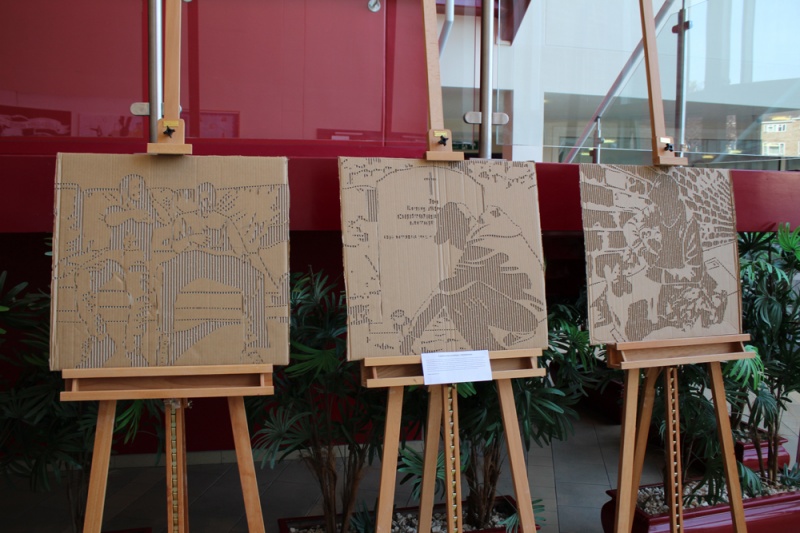