On Wednesday 3rd March Year 8 took part in our first ever ‘Treat Day’. Head of Year 8, Ms Gasper, tells us about it...

Our pupils enjoyed a range of activities on Treat Day. They began the day watching Michael Morpurgo’s Tales from Shakespeare: Macbeth, and during Period 2 they got creative making characters from the story, retelling the plot through storyboarding, animation and video and even experimenting with rhyme and creating their own spells. After lunch they took part in a scavenger hunt and those in school did some cooking while pupils at home had their down time.

The day went well and I have already received lots of positive messages from both pupils and teachers and some brilliant examples of the tasks produced by pupils. Please encourage your child to share their work with us if they haven’t already done so and to complete the pupil feedback from on Google Classroom.

Pupil comments about the day include:

“Period 3 it was just amazing and enjoyable...we ran around our houses or rooms and found objects, we did a Maths quiz and it was the most fun lesson today that ever happened!”

“The scavenger hunt was enjoyable because it was a break from sitting at the desk all lesson.”

Creative Macbeth – Please take a look at some of the fabulous work our year 8s produced during period 2...

Another great creation by Zaki...

...and a very creative video retelling the tale of Macbeth by Ackshaiyan:

There were also some great spell examples from Gregory and Sanjeeka...

Tail of rat and eye of newt

Scolding fire and ear of moose,

Fangs of bat with dogs fur

Trickle in a cat's purr,

Thumb of chimp and nose of man

A slimy substance in a mysterious can,

Bubble the broth till it all goes black

Then the time will go back!

Spiders guts but this time, double.

Cockroaches but make sure they are dead.

Wings of a bat, tail of a rat.

Ancestors soul, blood of a troll.

That was a lot of trouble,

Later on, pupils also enjoyed the chance to brush up on their cooking skills. There were some excellent cakes made by Brooke, Rian and Nell, and Acacia made some fabulous fishcakes! 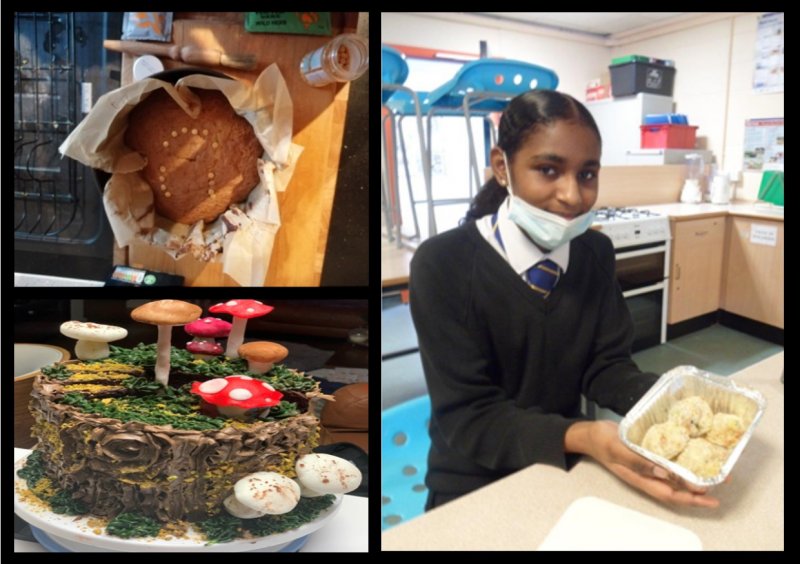