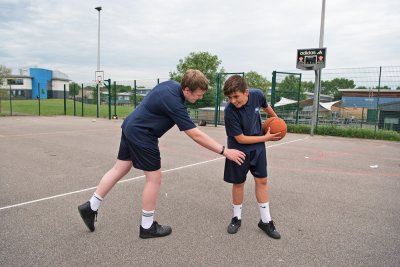 At Heathcote School and Science College we recognise and embrace our wider role in preparing pupils for life beyond academic education and their responsibilities in an exciting, dynamic society. An integral part of that preparation is to ensure that we promote both British and ultimately human values to our pupils.

The UK Government defined its British values in the 2011 Prevent Strategy and considered them to be democracy, rule of law, individual liberty, mutual respect and tolerance of different faiths and beliefs. At Heathcote School and Science College these values permeate through all levels of our school community.

The following examples are an indication of some of the ways that we encourage, discuss and embed British Values at Heathcote School and Science College. This is not an exhaustive list but highlights many of the significant ways that the school embraces its responsibility to its pupils and the wider society.

At Heathcote School and Science College democracy plays an integral role. Our Junior Leadership Team (JLT) members are significant in number, totalling over 80 pupils across all year groups, Year 7 through to Year 13. The leadership team are an elected group of pupils who assist the school in making decisions and forward planning. The school formed a debating club which was eagerly attended throughout the past academic year - this was at the request of prefects who lead many of the sessions. The JLT feed back to the rest of the school through tutor periods and assemblies. Many of their preferences and concerns are raised during workshops held half termly during which pupils discuss and submit opinions on a range of school based issues. The Jack Petchey Leader Award is also promoted, where pupils select a staff member who has made a considerable difference to their life or the lives of others in the school. The principle of democracy is also actively explored in the History, PSHE and RE curriculums.

The rule of law

The school accepts and embraces its responsibility in educating using laws and rules. Whether these are the laws that govern the class, the school, the community or the country, Heathcote School and Science College acknowledges its responsibility in informing its pupils of the role that laws play. Laws are used consistently around school when dealing with behaviour and expectations and these are also embodied in our requirement of a uniform. Pupils are taught the values and purpose behind laws and how these have evolved throughout national and international history. The laws that govern and protect us are and acknowledged whilst Heathcote School and Science College embrace our close relationship with community groups such as the Police, Fire and Armed Services. Our curriculum supports discussion and opinions on a number of laws and rules throughout history.

Within Heathcote School and Science College pupils are treated as an individual and have a freedom to voice their opinions in a safe, secure and supportive environment. It is the duty of the school to ensure that we educate and provide our pupils with the skills and knowledge to make safe, informed decisions regarding their own physical, social, emotional and mental development. We encourage our pupils to act responsibly when taking decisions and explore opportunities with an understanding of their rights and entitlements. The school has a duty to provide appropriate boundaries for the pupils without being restrictive to their development. Heathcote School and Science College values all pupils as individuals and we guide through pupils' consent wherever practically possible. Our PSHE curriculum, Pastoral programme, JLT and Anti-bullying Ambassadors are some of the ways in which the school meets its duty to our pupils.

Respect for others is a core value for all staff and pupils at Heathcote School and Science College. The school actively promotes respect for others throughout all classrooms, assemblies and the wider school environment. Our commitment to democracy and cohesive community relations are reiterated throughout the year and visible through the range of exposure our pupils have to different cultures, races, religions and traditions. pupils are always encouraged to voice opinions, debate and disagreement are an entitlement and healthy in a positive, respectful community. Pupils are encouraged to accept disagreement and different opinions whilst embracing empathy and tolerance towards all those in our school community. Heathcote School and Science College encourages pupils to show respect for others in assemblies, tutor times, debating clubs, JLT workshops, ‘fair play’ in PE and at appropriate times with staff.  Our mentoring programme “Stepping Stones” is cemented on a mutual respect between pupils across year groups, primarily years 7 and 10.

Heathcote School and Science College embraces its duty to equip our pupils with the ability to understand their place in a culturally diverse community and wider society. The school provides opportunities for pupils to experience such diversity within the school environment. The school also runs a number of trips, some abroad during which our pupils gain valuable experience of other cultures and languages. Our embrace of Black History month provides great insight into cultural differences throughout history. Visits from Holocaust survivors have been a wonderful addition to the curriculum whenever we can secure these remarkable individuals with such limited availability. The school meets the needs of religious groups through dietary requirements, religious observance and religious holidays. Reasonable adjustments are made and pupils and staff are made aware when pupils are involved in religious observance which may require support or amendments.

Our Religious Studies curriculum explores, encourages and acknowledges a range of faiths, religions and cultures to meet the overwhelming need of our immediate community.

Any concerns that you may have with the school's provision and promotion of British Values should be expressed to the Head Teacher.