“History is a compass that you locate yourself on the map of human Geography, politically, culturally and financially”

The study of history is not only a study of the past but also the future. Pupils develop important skills such critical thinking and analysis which allows them to understand what has happened and what can happen. Through the study of different eras and different regions, pupils are exposed to a variety of societies, cultures and world stories. 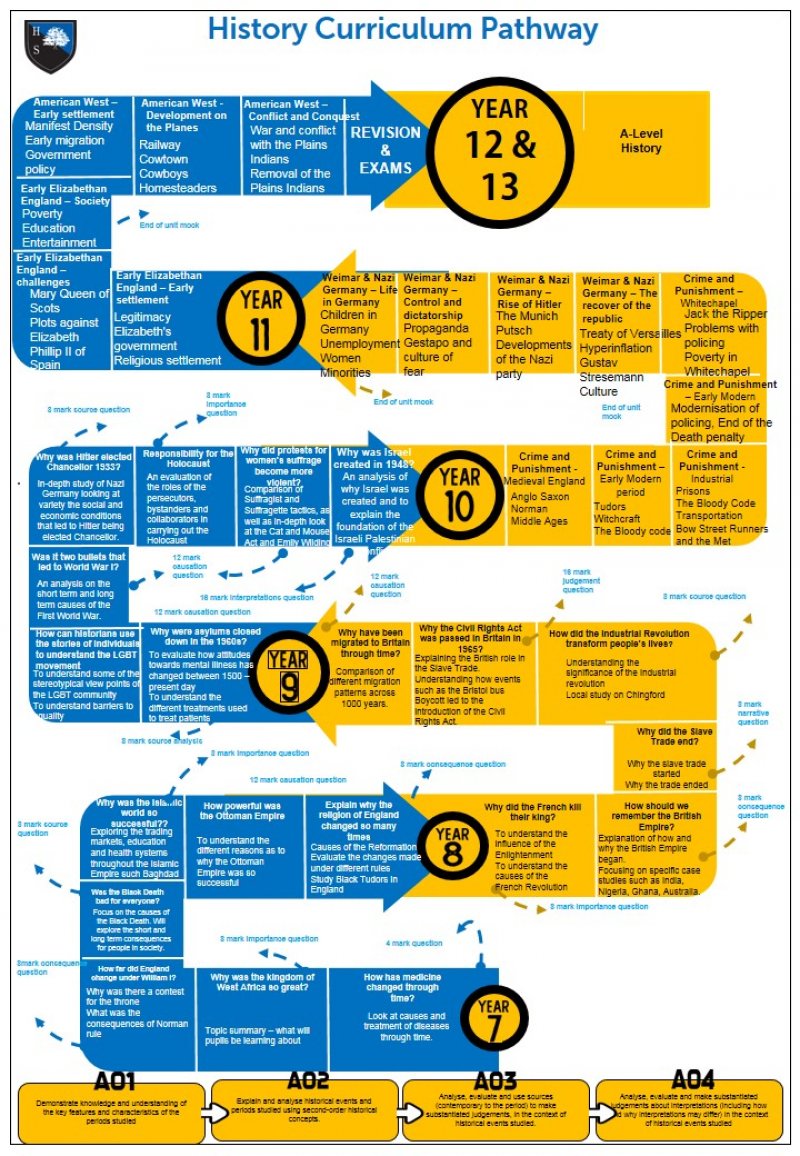 Pupils learn about a broad range of British, European and World History at Key Stages 3. Pupils are introduced to key historical skills including analysis, interpretation and source work.

In Year 7 pupils will study the development of Church, state and society in Medieval Britain 1066-1509. Pupils will be exposed to challenging questions about the significance of key developments in both English and world History.

In Year 9 pupils study the challenges for Britain and the wider World. Pupils will look at the causes of the World Wars, evaluating the social changes that took place following the wars including attitudes towards the mentally ill, women’s rights and the conflict in the Middle East.

At GCSE pupils study the Edexcel History specification. This covers a broad range of time periods as well as both British and World History. The exam papers are:

Medicine in Britain from 1250-present day - what factors have caused change and continuity across different ages and aspects of society? What key events, people and developments have shaped medicine and how can we make comparisons between the different periods studied?
The British Sector of the Western Front - pupils develop the skills to analyse historical documents with a focus on medicine and surgery during the First World War

Superpower Relations and the Cold War 1945-1991 - The Origins of the Cold War; Cold War Crises e.g. the Cuban Missile Crisis; The End of the Cold War
Early Elizabethan England, 1558-1558 - a detailed study of society, people and events. Pupils need to show an understanding of how the different aspects of the period fit together

Weimar and Nazi Germany, 1918-1939 - This depth study focuses on a substantial and coherent short time span and requires pupils to understand the complexity of a society or a historical situation and the interplay of different aspects within it. Pupils learn to analyse historians’ views of the past as well as documents from the time.