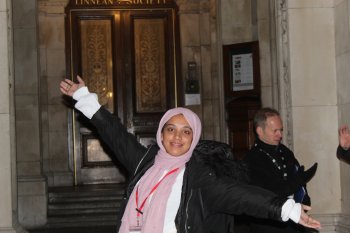 In November, some of our Year 12 students attended the Sir Julian Huxley Lecture 2019; "Sixty Years in Asian Rainforests: How Systematics could Support their Anthropocene Future". Shanina Ali tells us more about it!

On the 14th of November, we were taken to The Linnean Society of London where we were entertained by a renowned forest botanist named Sir Julian Huxley. Sir Huxley performed a lecture recounting his ten year experience living in Borneo, and how his journey had influenced his passion to specialise and discover the families of dominant canopy emergent trees.

We could clearly interpret how emotive Sir Huxley was as he preached the risks of tree logging and the lack of biodiversity through an octogenarian's perspective, focusing closely on the forests of tropical Asia. He told us how honey bees were most common as pollinators for biodiversity every five years in Asia, laying their eggs in flowers, which he concluded may be the cause of the existence of emergent trees.

Sir Huxley backed up his views with detailed PowerPoints presenting supportive data of how humidity, soil richness and dry climates affected populations of dense emergent trees all over Asia as well as humorous pictures of himself as a young adult, climbing the emergent trees with the indigenous groups (which over time he had built a very strong connection with). He further stated how our leading museum institutions must take more active steps to gain the support of political leaders, further expressing his humanistic views.

The event then finished off with questions from the public, where we further learned that populations can hybridise, however not at a high rate.