In February, some of our Year 12 Art students enjoyed a visit to Cambridge University for a History of Art Taster Day. Two of the students, Arnyah Khalique and Bethany Grover, tell us what happened!

A taster day at Cambridge University is a very rare opportunity for students. Only fifty students can be allocated places for History of Art and we were delighted to be selected to take part.

Upon walking into the university we followed the red signs stating ‘Follow for Open Day’. We walked in and found our remaining classmate Hamza Keskin, who was sitting waiting for the lecture to begin amongst the other lucky students from different schools around Britain.

Our lecture mainly consisted of a discussion concerning ‘Black Square’ by Malevich, created in 1913. We discussed a number of aspects of the painting including the fact that it was a revolutionary symbol in art, as Malevich had previously taken geometric shapes and created them with a limited pallet of colours to convey a certain painting form. However, the black square was a symbol of a ‘new curtain’ as it conveyed something different in contrast to his previous artworks. We were told that behind the black square was a previous painting done in the style of his old artworks, which he then covered with the ‘black square’ to highlight his previous artworks as being in the past. These previous artworks can be seen through the colours within the cracks of the black square if you look carefully. The lecturer -  Dr Marie Collier - also indicated that this painting was created during the Russian revolution, the Bolshevik Uprising and the October Revolution. Unknowingly or not, Malevich had created a revolutionary style of artwork for the Bolsheviks which they used as a symbol for moving forward with their regime.

The world renowned artist Vincent Van Gogh was discussed later on during a lecture from Paul Binski, in particular his painting ‘Wheatfield with Crows’, created in the final weeks of the artist’s life in 1890. On 10th July that year, Vincent Van Gogh wrote to his brother about what may have been his final painting, describing it as including ‘trees’. He also expressed to his brother that he wanted to highlight a sense of sadness, hence the inclusion of the path leading nowhere and use of a blue sky to express his sadness.

In addition to this, Gogh uses the technique “impasto” where he applies a thick layer of paint and uses visible brush strokes to emphasise his emotions; this 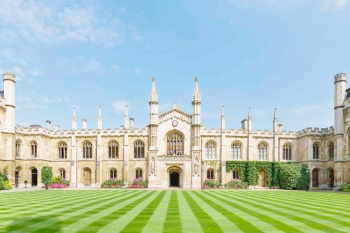 is shown in his painting where he has created a contrast of the wheatfield and sky. The latter has an ombre effect where he has used a dark blue paint, and lightened it using the colour white creating the clouds. When Gogh was painting he purposely created this effect to make it obvious to the viewer that two different things are happening in the artwork; this shown through the brightly-coloured wheat fields in yellow, green and brown contrasting with a darker tone for the sky. This is a good example of how the blue sky seems to portray a sad and downhearted mood, but at the same time the wheat fields give the impression that he is also happy.

After attending the two lectures we were shown to “Pembroke College” to eat lunch. Pembroke is one of Cambridge’s larger colleges, as well as being the third oldest. The actual canteen at the college was regularly sized, however their dining area was absolutely vast by comparison and actually resembled Hogwarts in many ways! Not to be overlooked, we have to say the food was nice too.

We were given a tour around the college and shortly after we were accompanied to the Fitzwilliam Museum, where we were taken into a back room to analyse three paintings.

In conclusion, the tour of Cambridge was a good experience and we are considering the History of Art degree course as an option in the future. Highly recommended.